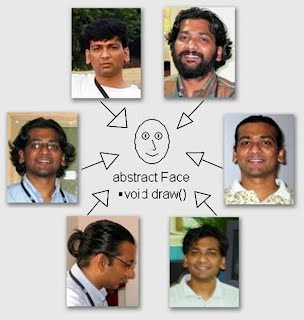 Satish Chandra Gupta's favorite pastime is teaching Polymorphism for Practitioners course and he has successfully used the accompanying class diagram as a classical example. He grew up in the industrial town of Kanpur at the bank of river Ganga. Apart from earning many nicknames (including Hyperion, after one of the Saturn's moon, by his PurifyPlus mates), he has also earned a B.Tech. in Chemical Engineering from Indian Institute of Technology, Kanpur in 1996, and a Masters in Computer Science (or master of disguise?) from University of Wisconsin - Milwaukee in 2001.

Quite long ago, he used to pretend to do research and managed to publish some of his work in ACM/IEEE conferences. His friends think that he wants to be a PhD or a Warren Buffett, but he secretly nurtures his fantasy to be a Hindi poet and novelist. At the moment though, he has settled for making his living by being just a programmer, most recently at Amazon, Microsoft Research, and IBM Rational Software, where he still wrote programs, dreaming all the while to write a novel one day. Till that day, he has resigned to his fate of getting his fix by trekking at high altitude in Himalaya and being finlosopher. At present, he is enjoying sabbatical.

Quiz for the day: Which Face is the latest? Implement an O(n) draw() method for that face.

Open Problem: How will he look when you meet him next? Hint: all concrete Faces existed with-in one year of each other, so it is a kind of trick question.

(Version History: The first version of this diagram and bio was created in June 2005; minor updates since then.)