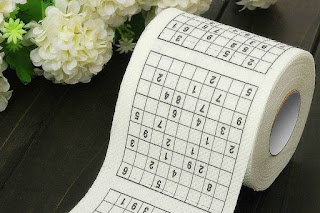 Yes, I acknowledge that I am addicted to SuDoku. So much so that sometime back, I wrote a program in Java to solve SuDoku puzzles that come in the newspapers that I get. The program encodes very simple techniques in efficient way for finding whether only a single value is left that I cell can hold, or in a row/column/box, only a cell is left that can hold a particular value.

After I was done, I googled to see what all is around related to SuDoku. And I was pretty happy that I was not the only crazy soul around. Here is some of the cool stuff:

The Wikipedia entry has quite interesting information, such as the general SuDoku problem is NP-Complete and can be expressed as a graph coloring problem.

You may ask why I am writing about all this today, though I had written my SuDoku solver quite sometime back. The reason is: the SuDoku that was in this Sunday’s (Oct 23, 2005) The Hindu newspaper. My ego was hurt because my program couldn’t solve a SuDoku that I could. So I updated the program, built in some more logic, so that it could solve that one. Two tricks are still missing from my program: n-tuple (pair/triplet etc), and patterns (X Wing, Swordfish).

Ah, some day I will write an applet with a nice GUI for my SuDoku program and put it on the web!